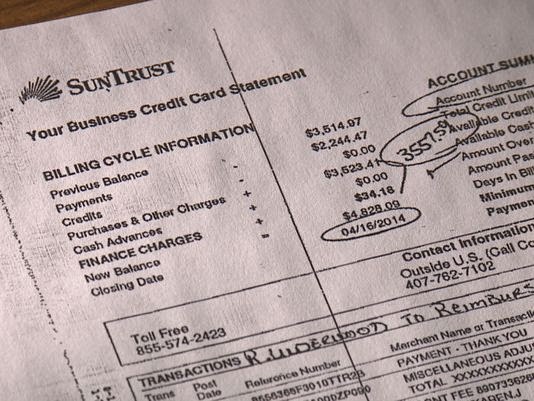 So the county in this year’s budget set aside something like $427.8 million for the school system.

You’d think that would be enough money to pay some $5,000 in credit card bills on time, right?

Last night Gentle Jim Matheny and I broke the story that the school system pretty much does not pay its credit cards on time (why do they need credit cards again?), and when they are paid, they don’t even pay off the full balance.

Is it a lot? No, but that’s not the point. It’s just another example of waste. (Don’t get me started on the school secretary on paid administrative leave for more than two years – another story we broke.)

Now, I’m sure school officials are going to blame Roger Underwood, the accounts payable administrator they recently fired because he was misusing his card. (Why do they have credit cards again?)

I mean, heck, why not? There’s some folks in the county who still blame every problem in the solid waste department on its former director, John Evans, and he’s been dead since late October 2007.

Anyhoo, school officials have declined to comment, citing the investigation into Underwood. We actually explained to them that the credit cards – late payments, etc. – have nothing to do with the investigation. Heck, the Knox County Sheriff’s Office at one point stepped in and tried to prevent us from getting the records.

Then the investigator looking into Underwood read them over and realized they weren’t apropos to what he was looking into.

(We’d have probably gotten them anyway, but it would have taken a little longer).

After that, we were told that the finance charges were self-explanatory. Wow.

So, the records we’ve got are what I imagine the county’s internal auditor and the Knox County Commission will get their hands on in the coming days.

It will probably be discussed during tomorrow’s BOE meeting.

I don’t see this one going away.

There’s a lot of questions that school officials haven’t answered. The easiest being why they need a travel agency to book flights. No, really.

You'd think, with a whole department devoted to PR, they'd be able to put a little more effort into their cover-ups and excuses. I wonder what happens when they run out of people to fire and blame for things that have been standard operating procedure for years.