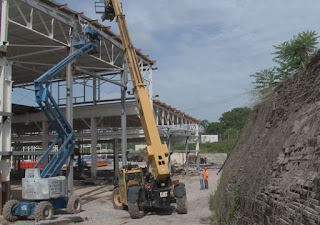 A University of Tennessee project to revamp an old industrial building on Sutherland Avenue has met some unexpected challenges.
The structure at 2000 Sutherland is the former home of the Southeast Precast Corp., which made concrete. Before that, in the early 1900s, it was built to house the Knoxville Marble Co.

UT bought the land in 2013 near Concord Road, and is converting it to house their Facilities Services division.

"You could probably go out and build a building from scratch for less than that, but it certainly wouldn't have the character, the quality, or the history we're getting with this reuse," Irvin said.

But it hasn't been easy. Once UT acquired the property, officials found serious issues with the ground: sinking soil had been filled with scrap marble for decades, creating a porous and unstable base. That delayed the project by weeks.

"The nature of sub-surface conditions is you don't know you have a problem until you dig up and find that you do have a problem," said Dothard. "So that was really something that had to be taken care of on the fly."

Parts of the structure rested on the shoddy ground. 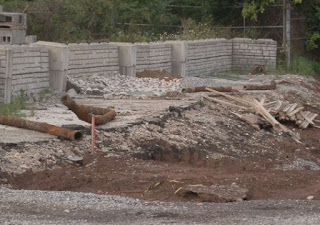 "There needed to be some serious structural reinforcement above ground and below ground to make sure this building would be adequate," Dothard said.

To remedy this, they pumped urethane, essentially liquid plastic, into the ground. There, it filled in the cracks and hardened.

Dothard said that was cheaper than digging everything up.

They also discovered sections of the structure that had been built without a foundation, a throwback to looser building codes.

"The way part of this building were built, you would not be able to build it that way today," Dothard said.

All told, the repairs cost between $1 million-1.5 million. However, Irvin said that was all covered by contingencies built into their budget. They were prepared for issues; they just weren't sure how they would arise.

Rest of story RIGHT HERE.
Posted by Mike Donila at 4:55 AM