After last night's meeting, in which the board talked about travel, KNS reporter Gerald Witt asked Smith why he drove to Nashville twice (which cost taxpayers $416 when - presumably - he could have picked up a phone and called).

According to the article (right smack here), Smith "said "he went to the state comptroller on a whistle-blowing trip that led to the ouster of former Trustee John J. Duncan III."

That office has nothing to do with CTAS payments, which were the cause of Duncan's downfall.

Further, R. Larry got almost all his information from the articles I wrote. Whistle-blower. Sure.

I broke the story, I first reported that someone else took tests for Duncan, and I was the first to write about the TBI investigation into the office.

I am not bragging. That's just what happened.

Along with the way WBIR also did some good reporting. They even had a scoop or two in there. Also, I think WATE reported about a showdown between Smith and Congressman Duncan, which Smith probably blew out of proportion, but whatever.

Anyhoo, I say this because, well, someone has to tell the truth. The investigation originated from the local District Attorney's Office. Not R. Larry Smith.

In the meantime, there were some fireworks from last night. You see, after Commissioner Amy Broyles nominated someone other than R. Larry to lead the board, he got upset. Right around that time he started trying to sell his story to the press that she traveled more than any other commissioner. (Another lie by the way.) A few news outlet bit.

But it didn't work out the way R. Larry anticipated. As noted from the pic below (taken during last night's meting.)

On a side note, Amy had the best line of the night when she told R. Larry: “Since being elected to commission, I have survived a shooting, two brain surgeries, a concussion, five cerebrospinal fluid leaks, viral meningitis, eight kidney stones, a tumor removed from my upper chest, a uterine hemorrhage and the beginning of menopause. I don’t think I’m going to succumb to one of your temper tantrums.” (Thanks for writing all that down, Gerald.) 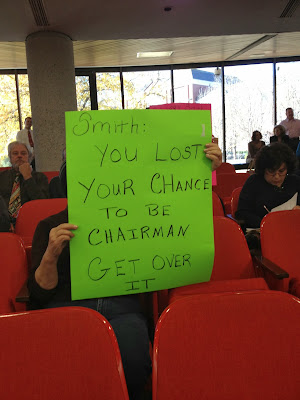