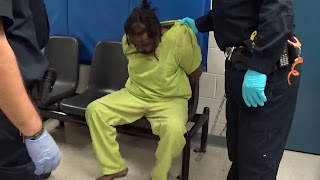 A settlement agreement has been reached between Knox County and Louis Flack, the mentally ill former inmate who was at the center of a 2014 jail beating captured on video.  The footage showed jailers punching and kicking him after he was cuffed, placed into a hog-tied position, and rendered defenseless.

Flack and his attorneys initially sought $5 million after filing a civil rights lawsuit in U.S. District court late last year. On Friday, though, the parties agreed to settle. Attorneys on both sides, though, declined to say for how much.

But, Flack’s attorney, Lance Baker, said Flack and his family are happy with the settlement.

“It was one of those things that was hard to turn down,” Baker said. “They’re happy and that’s the most important thing. There should be plenty to take care of him and his long-term need.”

The county and Baker will still have to reach an agreement on the attorney fees.

Flack, 54, was in custody at the Roger D. Wilson Detention Facility on Maloneyville Road in November 2014. Authorities initially arrested him for burglary and aggravated assault, although the charges were later dropped.

Rest of story RIGHT HERE.
Posted by Mike Donila at 8:40 AM