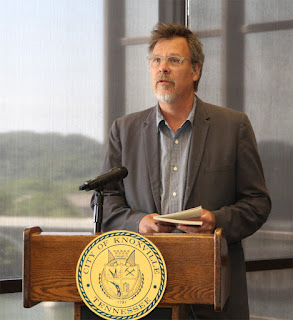 Knoxville Mayor Madeline Rogero today announced the appointment of writer, musician and playwright R.B. Morris as the first Poet Laureate of the City of Knoxville.

Morris, whose poetry often reflects on East Tennessee culture and history, will serve up to two years in the newly created position.

Mayor Rogero created the City’s Poet Laureate Program earlier this year, and nominations for the first appointee were considered by a committee of the Knoxville Arts & Culture Alliance. The selection committee forwarded its recommendation to the Mayor.

“I can’t imagine a more fitting selection for our first Poet Laureate,” Mayor Rogero said. “Like many in Knoxville, I have enjoyed and admired R.B.’s work for years. He has long shown a commitment to building and enriching our community, and this position will give him a platform to continue and amplify that work.”

Morris, a Knoxville native, has published several books of poetry, including “Early Fires,” “Littoral Zones” and “The Mockingbird Poems.” He has served as Writer-in-Residence at the University of Tennessee. As a singer-songwriter, he has released a half-dozen acclaimed albums and EPs, and his songs have been recorded by John Prine and Marianne Faithfull, among others. Lucinda Williams once called him “the greatest unknown songwriter in the country,” and Steve Earle said, “R.B. Morris is the reason I started writing poetry.”

“It's a powerful thing for Mayor Rogero to begin the tradition of a Poet Laureate for the city,” Morris said. “The legacy of the poets and writers who have come from Knoxville give the position great esteem and expectations from the start. It's a very special honor to be able to serve here at the beginning. I can accept it for all the poets and writers that are in our city now, and that includes all the great songwriters who are living and working here.”

Rest of the story HERE.
Posted by Mike Donila at 1:07 PM