Are they for real or blowing smoke? 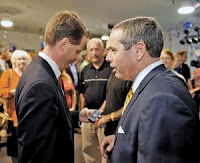 Some thoughts about today’s story, and the county’s upcoming budget.

The last guy must have taken it with him.
Heh.
So that means changes. Lots of them. Cuts. Layoffs. Whatever.
Maybe.
I’ve seen this all before. (But we’ll get to that in a minute).
Last Friday semi-new Knox County Mayor Tim Burchett held a “Come to Jesus” meeting with a number of his top aides. He told them to make cuts in their budgets or he would do it for them. They had until Wednesday to give him their preliminary drafts. Most did. The others are on their way. (The school system won’t turn one in until the School Board has gone through it, so that’s way later and a way different story.)
“The mayor made it clear what he wanted, but he’s not going to give them a magic number,” Burchett’s right-hand-man, Dean Rice, told me. “He wants to see what they’ll come up with and we’ll go from there.”
I wondered: Does Burchett have a specific number in mind?
No, he doesn’t, Rice said.
The mayor, though, does still plan to lay off employees. He has roughly 910 who work under him, earning a combined $34.5 million annually. He isn’t, however, expected to lay off anyone in his actual office. (He and Rice say they made enough cuts when the two came in last September.)
Now then, I suppose, it’s up to your to decide whether the mayor is serious. Or whether this all a ploy, smoke and mirrors.
Will the administration make the threatened cuts and use the money to pay off debt (as Rice has said), or is it all a game? Will the administration make a lot of noise and then – somehow, somewhere – find the printing press, save the jobs and look good?
I don’t know.
But I’ll tell you: Nothing so far appears new to me.

The setup looks like every other government I’ve covered, in every other town, every other time I’ve done it.
Still, we have some months before May 1 when Burchett turns the annual spending plan over to the 11 commissioners. And no doubt between now and then those folks will throw out a few well-heard catch phrases like: “We have to trim the fat” or “We’re going to cut it to the bone” or (my favorite) “I’m going to go line by line and find more savings.”

You see, I’ve been doing this for a long time. I’ve head the proposals. I’ve read the language. Threats, promises, whatever. They’re always made. But then nothing usually changes. Or if it does, you won’t really notice.
Take last year for example. At the time, then-Mayor Mike Ragsdale asked his department heads to give him several different budget proposals, including one that sliced as much as 8 percent off each plan.
But in the end, Ragsdale’s overall budget was reduced from the previous year by about $600,000. He balanced the general operating plan with $3 million from reserves.

Commissioners, before they got it, threatened to cut travel allowances, positions, expenses, blah, blah, blah.
Commissioners, after they got it, barely blinked.
I don’t know if things will be different this time around, with a new mayor.
But, I do believe the county’s $620 million debt frightens the administration (or Burchett and Rice pictured above). Actually, I think it terrifies them.
Unfortunately for the mayor, however, he doesn’t have a lot of places to cut.
Right now, 62 percent of the county’s overall current $647.1 million annual spending plan goes to schools. You think those officials are going to make serious reductions? Me neither.
Another 10 percent of the budget is for the sheriff’s office. I doubt “JJ” is making any cuts, either. And as a public safety policy, I’m not sure I want him to. But that’s not for me to decide.
Another 10 percent of the budget goes to paying off the aforementioned debt.
Really, the mayor doesn’t have a lot to play with. (Relatively speaking of course. There’s still tens of millions out there.) So – and if the mayor isn’t blowing smoke – it’s the executive branch that hits the chopping block.
That means, possibly, reductions in services, like engineering, recreation, libraries, etc. That means jobs. That means fewer projects. That means whatever.
Or, it means nothing.
We’ll just have to wait and see what happens during the next few months.
Posted by Mike Donila at 9:10 PM