Pinkston is no 'Lumpy' Lambert 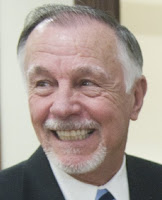 No, Pinkston says – despite word making the local rounds – he hasn't taken a $50,000-a-year security gig with the school system.

Nor does he want one.

(Lumpy, pictured on the far left, as you might recall began a new career in early January, working as a courtroom security officer.)

The former commissioner added that – other than his time on the county commission – he's been retired for eight years and plans to fix up his house - “and all the things I couldn't do before.”

However, Pinkston's son, a former police officer, has worked school security for the past 12 to 14 years. And Paul's wife still works for the PD.

In the meantime, Lumpy is still watching over one of the criminal courtrooms.

So far, he hasn't pulled a gun on anyway.

That I know of.