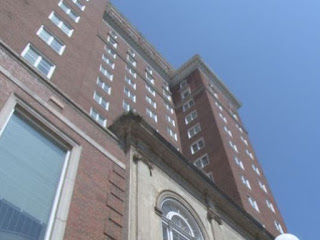 When Knox County and school officials finally got together to seriously consider selling the historic downtown A.J. Building, the plan was simple: Find some space to move the 209 employees who work there, sell the building and get it back on the tax rolls.

Or so the public was led to believe.

No, it’s not that simple.

The Knox County School system is seeking something a lot more complicated.

And quite frankly, what they’re seeking is probably not feasible.

Well, maybe the reality hit the KCS administration that the county is serious about selling this building and now some folks don’t want to leave.

So, here’s the deal.

KCS sort of began the bidding process by asking the county’s purchasing department to seek “requests for information” from folks (mostly Realtors, I guess) who would be interested in moving not only the administration offices but the operational side as well.

I thought we just needed to move the administration. You know, the peeps who work in the A.J. Building.
What’s up with this operations thing? They don’t operate in the AJ Building. No, they’ve got a nice set up off East Fifth Avenue and Rule High School.

Well now, that changes everything.

You see, instead of looking for 100,000 square feet of space, the school system wants HUNDREDS and HUNDRES of THOUSANDS of square feet, including warehouse space that will hold massive vehicles, and classroom space and parking lots that will hold more than a thousand cars.

Granted, the school system said it would settle for a proposal that just moves the administrative offices, and if you asked the good folks over there, they’d just tell you that they’re testing the water.

No conspiracy here. No way.

Anyhoo, I’ve talked to quit a few county officials about this and they know what’s up.

As it stands, the next step is to look over the proposals. I suspect the building will be put on the market, but I don’t expect much to change for a couple of years.

Here’s the story, RIGHT SMACK HERE, we did about the proposal.
Posted by Mike Donila at 6:34 PM