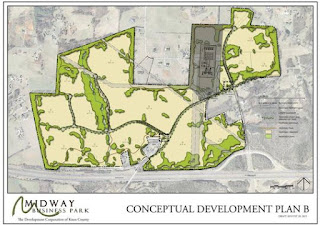 I think we all knew it would come back - the Midway Business Park. This time, it will more than likely pass the Knox County Commission. But, it's going to take awhile. Months. Maybe a year before it gets to a final vote.

When Grace Brooks looks out from her backyard, she enjoys a commanding view of the Smoky Mountains.

It's a view she says is perfect, just the way it is.

That's why a new proposal worries her – one that could lead to construction behind her rural home, and potentially obstruct her view.

"I'd hate to lose it," said Brooks. "I have no idea what they'd like to build over there."

Years ago, the Development Corporation of Knox County bought about 300 acres in the eastern corner of the county, near Strawberry Plains just off I-40. They planned to build the Midway Business Park there. However, the project didn't have enough support from the county commission and it met fierce resistance from those living in the area.

Now, they're trying again. A concept map has been released.

"It would mean, ultimately, thousands of jobs and a tax base for Knox County that would help everyone that lives here" said Todd Napier, of the Development Corp.

Rest of story RIGHT HERE.
Posted by Mike Donila at 9:21 AM