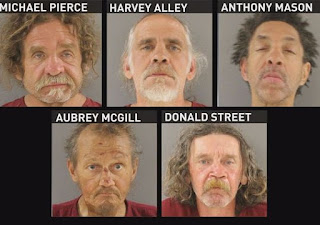 We started a 3-part investigation last night looking at the money owed from criminals to the county and their victims.

In the Knox County General Sessions Court system, four men notorious for having been arrested thousands of times collectively owe more than $600,000 in fines and court costs.

Michael Pierce, Harvey Alley, Donald Street and Aubrey McGill are the four worst offenders when it comes to people who owe the court system money, according to figures given to 10News by Knox County Criminal Court Clerk Mike Hammond's office.

A fifth man, Anthony Joe Mason, also appears on the Clerk's Office's list of worst offenders, but 10News has determined he died in April.

The defendants' bills never go down. They have been growing since the 1980s when the names of many of the five first were typed into the county's computer system.

Within all of his purview, Sessions Court, Criminal Court and Fourth Circuit Court, Mike Hammond said he faces $159 million in uncollected costs and fees. He said it's not realistic to think his office actually could collect all that money.

Rest of the story RIGHT HERE.
Posted by Mike Donila at 7:52 AM