The Knoxville Police Department has seen an outpouring of community support following the slayings of officers in Louisiana Sunday and Texas earlier this month. 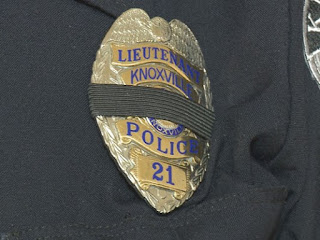 KPD employees say they consider the officers killed in the attacks in Baton Rouge and Dallas as part of their larger law enforcement family.

Waving outside the Knoxville Police Department, flags at half-staff serve as a seemingly constant reminder that tensions, unlike these banners, are as high as they can be.

However, that's not stopping David Corbin from applying to the Knoxville police academy.

"You're always going to have bad or good people in anything you do, and I feel like sometimes the bad gets focused on quite a bit," Corbin said Monday afternoon, before his interview for the academy. "I try not to let it hinder me too much, because no matter what is going on, I'll be - to my best ability - the good."

"Showing us that they really support us has really made a lot of difference here," Lt. Susan Coker said.

She shared an experience she had last week, when she was at a store in uniform and a woman approached her.

"She asked me if she could hug me, and, of course, I said, 'Sure,' because I was excited that someone cared enough," Coker said, with a smile on her face.

The Tennessee Association of Chiefs of Police is asking all law enforcement officers in the state to "shroud" their badge this week. That means putting a black elastic band over the center of the badge as a sign of mourning.