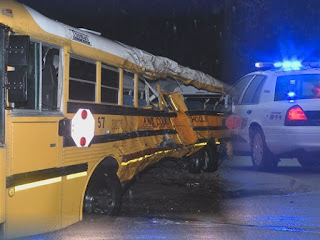 (Monday and Tuesday on 10News at 6, why despite school bus safety problems, experts say children are safer on their way to school when riding the bus.)

Parents of roughly 21,000 Knox County school students rely every day on bus drivers to safely get their children to and from school.

But a recent study commissioned by Knox County Schools found in the last half decade the school district has double the number of crashes it should for a district of its size.

And in the past three years alone, more than 60 bus drivers were to blame for some 120 wrecks.

That includes the three lives lost in the December 2014 accident that killed two elementary students and a teacher’s aide.

As a result, some officials believe, ridership has dropped.

Still, local, state and federal leaders also maintain that the bus – not a parent’s car – is the safest route to school.

“They’re bright yellow, they have a known route, a trained driver, you have side wall strength, you have roof strength, there are flashing lights, they are designed to be observed,” said Kris Poland, a senior biomechanical engineer who investigates crashes for the National Transportation Safety Board, including the one in Knoxville. “People know how to act around them in most cases.”

About five children die every year inside a school bus compared to 37,000 deaths inside cars, according to federal reports.

Still, school officials, investigators and those whose family members died on the afternoon of Dec. 2, 2014, say buses can be safer.

For rest of story and video, click HERE.
Posted by Mike Donila at 8:23 AM