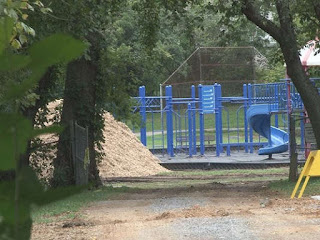 With a new school year underway, parents at Powell Elementary are scrambling to raise as much as $12,000 to get the school’s playground up and running again.

The move comes after inspectors told school officials in early July that the playground’s mulch was no good and suggested shutting it down.

"It's going bad and it will be bad by the time this school year is over, so it needed to be replaced before this school year started," said Randy Smith, who works in the county's Risk Management Department. "The mulch eventually breaks down and turns to dirt.”

Since then, work crews have removed all of the old mulch, but school officials and parents are trying to figure out how to replace it and who should cover the costs.

Typically, the area’s various student-support organizations raise funds for playgrounds and the equipment. But, officials with the Powell Elementary School PTA say at this point they can’t afford it.

“Our operating budget is not even near what we need to fund the mulch and do the other things we do for our students,” such as family engagement activities, Halloween festivities, movie nights and staff appreciation events,” said Melissa Hammond, the school’s PTA president. “If we expend what this will take, we will have nothing left to do those other things for our school.”

Hammond said the organization each year budgets between $1,700 and $3,000 for the playground, which usually includes bringing in “a load or two” of mulch to top off what is already there.

Over the years, however, the mulch hardened and created a dangerous surface.