The Middle Tennessee State University has conducted a number of polls recently, including one on Insure Tennessee - RIGHT SMACK HERE - that I thought were interesting. Here's the latest one and the university's release below:

Tennesseans favor some, but not all, of several proposed abortion rules pending in the state Legislature, the latest MTSU Poll finds.

“Across every form of abortion regulation we asked about in the poll, the proportion in favor of it came in more than 10 percentage points higher among evangelical Christians than among non-evangelicals,” Blake said. 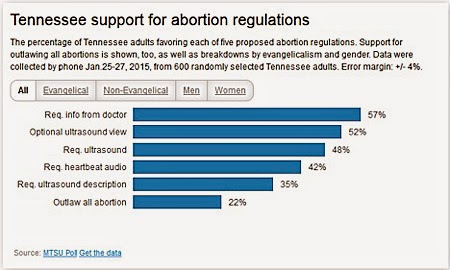 “But both groups have reservations about the same things. For example, evangelicals and non-evangelicals alike are less likely to favor describing an ultrasound image to a woman who has refused to look at it than to favor requiring her doctor to talk to her about abortion risks, benefits and alternatives.”

The poll found that, among all Tennesseans:
“The largest difference between evangelicals and non-evangelicals was over requiring that audio of any heartbeat detected during a pre-abortion ultrasound be played aloud,” Blake said. “More than twice as many evangelicals (54 percent) expressed support for that measure compared to non-evangelicals (24 percent).” 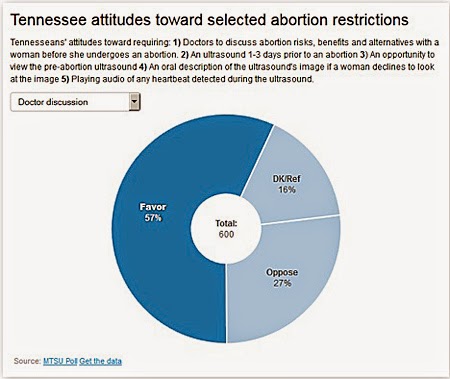 Attitudinal differences between men and women on abortion regulation, by contrast, were all non-significant, Blake said.

“Men in our sample tended to be more in favor of abortion regulation than the women in our sample, but the percentage point differences were all in the single digits and not large enough to suggest a similar difference between men and women in all of Tennessee,” he said.

Meanwhile, 55 percent of state residents oppose “allowing gay and lesbian couples to marry legally,” still a majority but a drop from the 64 percent opposition observed in the spring 2014 MTSU Poll. Thirty-two percent favor allowing such couples to marry, and the rest aren’t sure or declined to answer.

Jason Reineke, associate director of the MTSU Poll, said the decline in opposition to same-sex marriage is notable.

“It’s too soon to say whether the softening opposition to same-sex marriage that polls show happening around the country is showing up in Tennessee, but it’s a number that will be interesting to watch after this summer, when the U.S. Supreme Court is likely to release its ruling on same-sex marriage,” Reineke said.

A 53 percent majority of Tennesseans oppose raising the state’s gas tax to fund better roads and bridges. Twenty-six percent support raising the tax, and a considerable 21 percent are undecided.