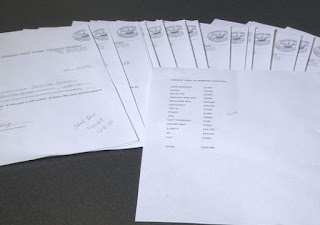 More than a dozen East Tennessee bail bonding agencies owe the state a total of almost $141,000 because their Knox County defendants failed to show up for court, records show.

Knoxville-based Unchained is on the hook for the most at $54,500, and AA Bonding, which has regional offices, owes $32,550, according to records provided by the Knox County Criminal Court Clerk's Office.

Some bonding companies counter, however, that the figures do not tell the whole story.

Sean Sanford manages Sanford & Son, which dates to the 1930s. He said only a few companies owe much of the money. Sanford, who learned Friday the clerk's list showed him owing $2,000, said he quickly paid what he owed.

He also said one notice from the clerk's office was in error and that he owes nothing for the defendant.

The three companies identified as the top offenders either declined comment or could not be reached.

Rest of the story RIGHT HERE.
Posted by Mike Donila at 4:20 AM