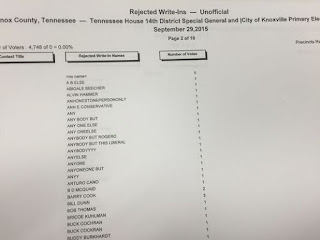 Voters might not have turned out Tuesday night, but phony baloney write-in names were certainly plentiful.

You name it – from the funny, the serious, to the truly absurd – those few voters who did hit the ballot boxes had fun.

Or, maybe they just wanted to make a statement.

Some suggested Mickey Mouse for a Knoxville City Council seat, others felt Blue Kevin, Dude or My Right Foot would do the job.

Heck, one person thought putting WBIR’s Mike Donila down for mayor was a good idea.

“Unopposed Unacceptable” made an appearance, and so, too, did “Someone that is Fair,” Malcom X, Abraham Lincoln and Bernie Sanders.

Then there was a pick for Knox County Communications Director Michael Grider – but under the guise “Slim Sexy Grider.” (Hey, the guy’s been on a cycling kick!)

In addition, someone named “Good Luck Jason From Dan” appeared on the final tally, along with No
Vote, none, anybody, and anyone else.

None of these aforementioned names counted, of course, since they weren’t registered with the Knox County Election Board.

But, the write-in votes for “Jack Knoxville” (or a variation of that name) did, as Knoxville took the time to officially submit his name in the mayoral race. He received 46 votes, which was good for little more than 1 percent of the vote.

In the meantime, the November run-off for the remaining City Council seats is just around the corner.
Expect the fun to continue then.
Posted by Mike Donila at 12:22 PM