The Knoxville Police Department on Tuesday announced that it has changed its policies tied to employee freelancing after four K-9 officers were disciplined for moonlighting in Ohio, Oklahoma, and Texas and didn’t report their activities. 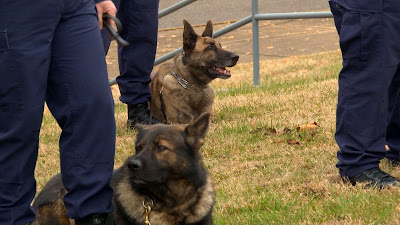 The move, discussed publicly on Tuesday, comes in the wake of a six-month long Internal Affairs investigation kicked off in mid-April after two officers complained to the city’s law department about “multiple violations of the secondary employment policy,” according to KPD Police Chief David Rausch.

Three of the officers – Darrell Sexton, Adam Moore and Richard Wallace – took police dogs to other states to perform drug searches on traveling circus trains, Rausch said. In addition, Lt. Doug Stiles authorized the actions, which were “outside the scope of services provided by KPD."

Also, Sexton took just under half an ounce of marijuana that was confiscated in May 2012 in Columbus, Ohio with him back to Knoxville to use in canine training. City officials said he never removed it from the trunk of his KPD cruiser and it was still there - three years later - when IA interviewed him.

Sexton then removed the drugs from his car and properly logged them with the KPD Property Unit.
Rausch stressed that none of his employees broke the law, but rather violated city and police department policies and procedures.

He said the officers never submitted the proper forms to moonlight, and failed to submit the proper paperwork to use the dogs.

The chief also said that “there was no intention to hide the drugs from anyone – the biggest issue we had with it was that it was never documented.”

Rest of the story RIGHT HERE.
Posted by Mike Donila at 6:59 AM