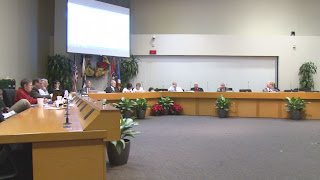 The commission voted to change the sector plan and zoning for the property, which has been owned by the Development Corporation of Knox County since 2006.

The Development Corporation previously tried to introduce a business park to this area several years ago, but the plan did not have enough support.

At the meeting Monday night, residents of the area surrounding the proposed site voiced their opposition to the plans.

“I was disappointed, and I'll tell you the reason is because they've asked for community input,” said Ed Reid, a resident of the area. “Every time, including tonight, lots of people show up opposed to it, and it means nothing to them."

Those opposed to the business park idea cited concerns that the land has sinkholes and runoff issues, and it would bring unwanted traffic to a rural residential neighborhood.

Representatives from the Development Corporation spoke at the meeting, and said the land fits the criteria for a business park. The representatives also said a new business park would help bring more businesses to Knox County and expand existing ones.

Rest of story RIGHT HERE.
Posted by Mike Donila at 10:20 AM