Yes, yes, I know I'm lazy. I should probably write up something fancy about Bob Thomas's kick-off yesterday in his bid for Knox County Mayor. 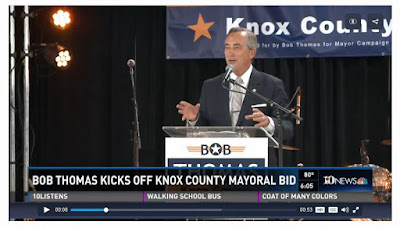 But I'm lazy. Heh. Click RIGHT SMACK HERE for the video we did yesterday.

The primary is still two years away, but Knox County Commissioner Bob Thomas on Friday will announce a political treasurer for his mayoral bid, a move that will allow him to raise and spend money on his campaign.

Thomas, one of two at-large Republican commissioners and a former local radio personality, said he will file the paperwork at the Knox County Election Commission at 1:30 p.m. He plans to name Mike Price, a well-known developer in West Knoxville and former University of Tennessee football standout, as his treasurer.

Rest of that story RIGHT HERE.
Posted by Mike Donila at 9:25 AM