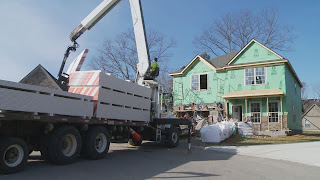 Knox County officials are looking into a proposal to double the cost of building permit fees for new homes and bring them more in line to those of Knoxville and Farragut.

The move – if approved by the Knox County Board of Commissioners – would increase revenues by more than $1 million annually and allow the county to use the fee to fully self-fund its inspections department for new construction.

County leaders haven’t increased the fee since 1994 and, at this point, the general fund – which is supported by tax payer revenues – covers part of the cost of the department.

“We’re not rendering any judgment, but we just thought it was important to lay the question out for commission’s consideration,” said Dwight Van de Vate, the county’s senior director of its Engineering and Public Works Department.

Van de Vate brought the proposal to commissioners during Monday’s work session. The board is expected to vote on it during its May 23 meeting.

Permit fees for the same home in Knoxville and Farragut currently run about $1,370.

The fees are typically charged to the builder or homeowner during the course of construction. In theory, the fees are supposed to cover the inspections department, but right now the general fund has to help pay for those operating costs.

However, Dan Mitchell, Vice President of the Home Builders Association of Greater Knoxville, said home development fees should differ in cities and counties.

"When you're building inside the city, and let's use Farragut as an example, part of their permitting structure is also to help pay for the roadways and the sidewalks and the infrastructure that's located within the city," he said.

Mitchell continued, "But when we're talking about the county, where it's more out in rural areas typically that these homes are being built, it's not the same comparison when you say this permit fee is going to be used in the same way."

He also said a change of this size could be too quick and drastic for developers and home buyers.

"If this increase comes in a short term, it's going to have an impact on those projects that we have in the pipeline now, but several projects we may have in the next 6 to 8 months," Mitchell said.

Van De Vate based the proposed increases on the International Code Council’s residential building code, which is a set of construction standards that governments nationwide have adopted.

“We’re trying to avoid coming up with arbitrary numbers and instead use figures that relate to the cost of construction,” Van de Vate said. The (International Code Council) gives us that guidance that’s based on the costs of materials and work.”

Knoxville, Farragut and Knox County each adopted the International Code Council’s standards, but the county hasn’t raised its fees in 22 years.

Van de Vate said officials pushed for an increase in 2007, but the commission rejected it. He said the housing market then bottomed out a short time later, so officials wanted to wait until it recovered before trying again.

“We didn’t think it was a fair conversation to have until the construction trades had recovered,” he said.