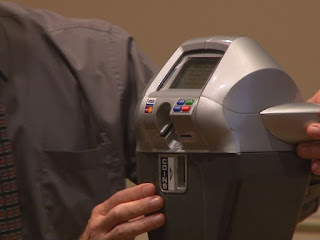 Deputy to the Mayor and City of Knoxville Chief Policy Officer Bill Lyons said most parking meter rates haven't changed in more than a decade.

Each meter will feature sensors to show which and when spaces are being occupied. They will also accept credit card payments.

“Our entire pricing mechanism is based on turnover on the on-street parking, and we’ve had to adjust our rates to more market standards for that to happen," Lyons said. "But as long as we have free nights and weekends at the garages, everybody has the very easy option of just parking in the garage and walking a pretty short amount.”

Besides free parking after 6 p.m. and on weekends in city garages, meter rates are generally on the rise.

Short-term on-street spots will cost $1.50 per hour with a two-hour maximum stay. Monthly rates in city garages will go up to $5 per month, with downtown residents only required to pay half of that.

Long-term parking spaces will be 30 cents per hour with a 10-hour maximum stay. Those meters will be on the northern half of the Gay Street Viaduct, Depot Avenue and South Central Street.

But monthly daytime commuter parking at the Coliseum will decrease to $15 per month, accompanied with additional trolley routes from that garage every 7 to 8 minutes all day on weekends.

Rhonda Byrd lives right on Gay Street, and she said the new meters could help free up spaces she's always on the hunt for.

“I think it will help the rollover time to where people will have more opportunities to park on the street," Byrd said. “When you come back for groceries, you have to see if there’s a spot anywhere around that you might be able to park for just a minute of time to take your groceries upstairs.”

More installments later on will include parking apps for the meters, garage technology and evaluations on the new installments.
Posted by Mike Donila at 12:32 PM