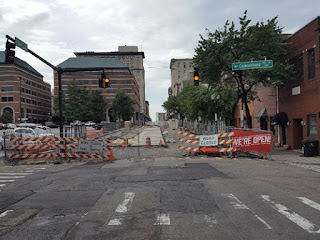 The city has pushed back completion of its $1.5 million downtown rehabilitation project along the 700 block of Gay Street, so that local cable and internet providers can install the needed infrastructure to create easier access and service for the nearby buildings.

The city extended the date from mid-June to July 31 as Knoxville officials coordinate with AT&T, WOW!, and Comcast,  said Jim Hagerman, the city’s director of engineering.
City leaders said they “regret the delay and inconvenience” the move might create.

“We realize that internet cable access is a challenge for a lot of our buildings downtown, so as we do the infrastructure work, we encourage the local providers to take advantage of that and get in there and put in some fiber,” said city spokesman Jesse Mayshark. “It’s unfortunate that this has been pushed back, but the result will hopefully be better options and internet access for buildings in that area.”

The 700 block, which runs between Cumberland and Church avenues, is near the Gay Street Bridge downtown entrance and where many of the shops, restaurants and condos begin to line up along the popular north-south thoroughfare.

The close-off area features a number of business, including a pizzeria, a law firm, a flower shop and a deli.

The rebuild kicked off last Dec. 9 with the entire street along the block closing a week later. The intersections at Cumberland and Church avenues for the most part have remained open as has the sidewalk in front of the businesses.

The area is the last block of Gay Street that hasn’t undergone an upgrade, and some of the infrastructure is 100 years old.
Posted by Mike Donila at 8:15 AM