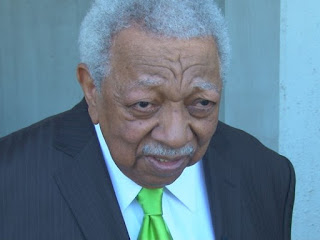 Local civil rights leader Avon Rollins Sr., the Knoxville native who led protests in the 1960s when he was in college, passed away Wednesday. He was 74.

Rollins, who worked to get African-Americans access to businesses downtown, explained his role to WBIR's Bill Williams in a 2006 interview: "We were students at the University of Tennessee. I was, along with Marion Barry.  And we joined forces with students from Knoxville College. And we began to demonstrate at the theaters downtown, principally at the Tennessee and the Bijou.  Probably hundreds of people were put in jail as a result of the demonstrations."

Rollins was a founding member of the Student Non-violent Coordinating Committee. He later took part on the 1963 march on Washington.

At the dedication, Rollins had this to say about his legacy, "I have an Avon-ism says that my ears do not hear what you say because my eyes see what you do. And I try to live a life so others can see the good things I try to accomplish and try to do."

"Our thoughts and prayers go out to the family of Avon Rollins. He was an extraordinary man, who believed in making this country better, for all those who live here. We will remember all that he has done for our community, and the countless sacrifices he has made as well."

Others who have weighed in:

Robert Booker: “I’m saddened to hear about the death of my friend Avon Rollins. He was an outspoken leader who spent his life making our community a better place. My prayers are with his family. I've known Avon since the early sixties, since right after he graduated high School.  I’m pleased with what he did with the Beck Center, how he was able to get money to add the additions to make it more useable to the community.”

Knox County Mayor Tim Burchett: “I’m saddened to hear about the death of my friend Avon Rollins. He was an outspoken leader who spent his life making our community a better place. My prayers are with his family.”

Madeline Rogero: "Avon Rollins was a great champion for civil rights, in Knoxville and nationally. He was a leader as a University of Tennessee student, fighting for desegregation here, and he helped found the Student Non-Violent Coordinating Committee, which fueled the civil-rights movement nationally. Avon believed strongly in preserving and interpreting African-American history and culture, and he was a guiding force at the Beck Cultural Exchange Center for decades. I’m personally saddened by the loss of my friend. Our thoughts and prayers are with his family and many, many friends.”

Knoxville Area Urban League president Phyllis Nichols: “It’s hard to have a conversation about the civil rights movement in Knoxville without mentioning the name of Avon Rollins. Dating back to 1963 and the iconic photo of Rollins lying in front of the Tennessee Theatre protesting segregation, the ‘face’ of civil rights in our area often has included this remarkable servant leader. He will be missed, but his legacy will endure. The Knoxville Area Urban League is committed to promoting the equality and empowerment for which he fought.”
Posted by Mike Donila at 9:26 AM