Campfield only vote for term-limits 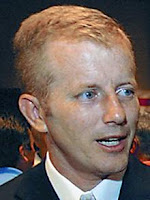 But, he’s also the only member of the Legislature - given the chance Wednesday to move a bill that would term-limit state senators and representatives - to man up.

In fact, Democrats and Republicans voted against the measure. You know it wouldn't have killed the committee to sign off on the proposal and let the entire General Assembly decide.

Then again, maybe it would have.

Now we won't know where the rest of them stand.

But, I'm sure you can figure that one out.

Committees of both the House and Senate on Wednesday rejected attempts to set term limits for state legislators.

On a bipartisan basis, members of the Senate Judiciary Committee soundly rejected SJR008 by Republican Sen. Mike Faulk of Kingsport.

It proposed to amend the state constitution to restrict representatives to four two-year terms and senators to two four-year terms, or eight years total for each.

Faulk contended that term limits would help legislators vote on the basis of principles, rather than popularity.

It would also "encourage turnover and a fresh set of ideas," he said, noting that eight years is the same term limit now in place for governors and the U.S. president.

But other senators spoke against the idea of term limits. It wound up getting only one yes vote versus seven nays.

Sen. Doug Overbey, R-Maryville, said term limits would tend to lead to a professional legislative staff that would "run the Legislature" rather than elected representatives.

Only Sen. Stacey Campfield, R-Knoxville, voted yes on the proposal while seven senators voted no.

In the House State and Local Government Committee later in the day, a similar proposal, HJR62, by Rep. Mark Pody, R-Lebanon, failed on voice vote. Though the vote was not recorded, House Democratic Caucus Chairman Mike Turner of Nashville said all Democrats supported the measure while the Republican majority opposed it.

Make sure you click on the quotes by Sen. Mike Bell and Sen. Doug Overbey. I translated for you.

Apparently, term-limits are good enough for governors, presidents, whatever. But not Tennessee's senators and representatives.

In the meantime, maybe the voters should decide this issue.
Posted by Mike Donila at 6:33 AM