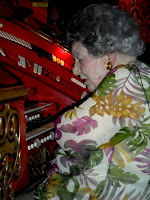 I occasionally get asked why I don’t write more “positive” stories.

But the truth of the matter? I don’t want to. I mean, really, why should I?
I might as well go down to the airport and write a story about how the plane landed safely.
I mean it’s SUPPOSED TO FREAKIN’ LAND SAFELY!
So, no, I don’t like “positive” stories.

(I hope that vent made sense. I feel better now.)
With that said, however, if you live to be 100 (like Elizabeth Hill DeYoung - above right) and the county issues a press release (and it’s a slow day on screams from the porch), then I’ll post it.
Anyhoo, here’s to your first 100, Ms. DeYoung. And to 100 more.
Happy Birthday!
Here's the release:

Knoxville, Tenn. — It’s never too late for dreams to come true. During her 100th birthday celebration in January, Elizabeth Hill DeYoung was given regal treatment, thanks to her family, the staff at Elmcroft Assisted Living, local media and Knox County Mayor Tim Burchett.

During the celebration, Mayor Burchett surprised DeYoung with a proclamation honoring the centenarian’s life and declaring Elizabeth Hill DeYoung day in Knox County. After speaking with DeYoung, Mayor Burchett discovered her musical dream of playing the Tennessee Theatre’s Mighty Wurlitzer pipe organ, so he helped organize an event to make her dream a reality.

On Monday, March 7 she was honored during the James A. Dick Mighty Musical Program at the Tennessee Theatre. After the program, Mrs. DeYoung had an opportunity to play the Mighty Wurlitzer on the Theatre stage.

“It was a dream come true for me,” Mrs. DeYoung said. “Thank you to Mayor Burchett and Dr. Snyder for helping make this happen.”

“Our senior citizens have contributed so much to this community, and it’s important that we recognize all that they have done for those who come after them,” Mayor Burchett said. “Elizabeth is no exception, and she’s earned her moment in the spotlight.”

Organist Dr. Bill Snyder, who is also the managing director and development director at the theatre, personally helped organize this opportunity and believed it was important to get the entire community involved with the theatre performance.

“The Mighty Musical Program gives senior citizens the opportunity to come to the Tennessee Theatre where otherwise they might not get the chance,” Snyder said. “The program allows all individuals to have a memorable and enjoyable experience.”

Elmcroft Assisted Living, where DeYoung is a current resident, brought several seniors to support DeYoung at the theatre. Residents and management staff at the facility believe no one was more excited about the event than DeYoung.

“I really appreciate everyone who has worked to make this happen, including Mrs. DeYoung’s family, the Elmcroft staff, the Tennessee Theatre and most importantly Dr. Snyder, who was so willing to help put this special day together for Elizabeth,” Mayor Burchett said.