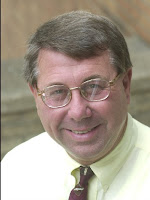 Was just scanning though the minutes to the Feb. 24 East Tennessee Development District meeting.

Someone around here has to.

Because it's not like anyone from the Deathstar (city or county side) attends these things.

(By the way, the ETDD is an association of local governments that provide the area with planning and development services and serves as a forum for the members to talk about problems associated with economic development and growth, according to its website.)

Anyway, close to the end of the 10-page report, I came across a familiar name: former Knox County Chief of Staff Mike Arms (above).

Arms and former Mayor Mike Ragsdale are working as consultants, doing something with education. (It's early in the morning. I can't remember.)

But, Arms gave a presentation to the board about the Association of Tennessee Valley Governments “and the top 10 reasons why you should join the ATVG.”

So, Arms is now an advocate for the advocates.

Here's the Top 10 reasons if you're interested (and my side comments because I'm a smart ass):
According to the ATVG website the dues for local governments are based on the 1990 census as follows:

Update: By the way, Knox County under the Ragsdale administration paid dues - $2,200 each year - to join the ATVG. In fact, the county is a member right now. I imagine that will change when Mayor Tim Burchett puts together his upcoming budget.
Posted by Mike Donila at 7:35 AM