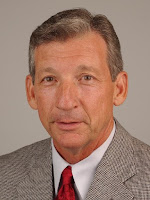 Talk about an unlikely alliance.

Apparently state Rep. Frank Niceley, left, and the Tennessee Education Association are working together to get school superintendents elected, rather than appointed.

The two sides haven't exactly seen eye-to-eye in 20 years. (His words. Not mine.)

“When a conservative like me and the TEA both agree on something, then it's time to take a look at it,” said Niceley, who represents parts of Knox County and most of Jefferson County. “This is one of the first times the TEA and I have worked together.”

I guess something most have frozen over.

Anyhoo, lawmakers should discuss the bill further next week.

If two-thirds of a county commission calls for a referendum and the voters sign off on it, then it's possible that we'd one day – again – hold elections for superintendents. (Back in 1992, the General Assembly phased out elections for school directors, letting school boards instead make the appointment.)

By the way, state Sen. Stacey Campfield is co-sponsoring the Senate version of the bill. (Yes, click on that – it gives you more detail.)

Niceley, the House bill sponsor, said he was recently in Union County when “the TEA – the teachers – asked me: 'Frank, what can we do. We need to have a director of schools that last more than a year.'”

Apparently, it's not uncommon for school superintendents to tick off school boards in some rural counties. They don't last long when that happens.

“Some of these counties are paying three (superintendents) at one time, kind of like a UT basketball coach,” Niceley said.

The state representative said “80-plus-percent of the people” in Jefferson county favor the proposal. He did, however, admit that Gov. Bill Haslam told him recently that he didn't support it.

(Not sure how he got that number, but I digress.)

“When 80 percent of the people want to do something and the experts say you can get just as good of a person through an election as appointing one, then we should do it,” he said. “There's no evidence from the test scores to suggest that one (way) is better than the other.”

This issue comes up a lot. But, I expect it will at least get out of committee this year.

Here's a note from Knox County School Board Chairwoman Indya Kincannon opposing it.

(My esteemed colleague, Scott Barker, a member of the KNS editorial board, sarcastically added: "Emulating Mississippi on education is the way to go."

Here's some reasons to change it.

Personally, I'm concerned that elections limit the hiring pool, since candidates would have to come from the area. (Although that probably doesn't upset all the “you're not from around here, are you” folks.)

But, it could stop the revolving door of directors, too.