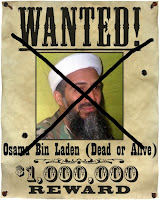 Let's try not to make this about Republicans and Democrats. For once. OK? (Heh. With that said is there any way we can march his flea-ridden head - on a stake - through downtown New York?) Here's what the AP is reporting right now:

WASHINGTON – Osama bin Laden, the mastermind behind the Sept. 11 attacks against the United States, is dead, and the U.S. is in possession of his body, a person familiar with the situation said late Sunday.

President Barack Obama was expected to address the nation on the developments Sunday night.

Officials long believed bin Laden, the most wanted man in the world, was hiding a mountainous region along the Pakistan-Afghanistan border.

The officials spoke on the condition of anonymity in order to speak ahead of the president.

The development comes just months before the tenth anniversary of the Sept. 11 attacks on the World Trade Centers and Pentagon, orchestrated by bin Laden's al-Qaida organization, that killed more than 3,000 people
Posted by Mike Donila at 8:40 PM

I don't know how to feel about this. One the one hand, great. He's dead, and he deserved death.

On the other, this isn't how the US is supposed to do things. We're not a land of stealthy ninja killers. We're the land of the free, home of the brave, and our idea of justice is one's day in court.

I keep thinking bin Laden should've had that - if for no other reason than to confirm to the American people that yeah, we got him and yeah, he's going to pay.

So, I don't know what to think.

The man created so many atrocities. I want noone to die, but I enjoyed immensely reading his obituary.