Political Leverage done but not Dan 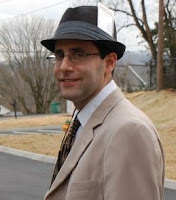 “Parkinson's drains you mentally, physically, financially and emotionally. To give you insight I used to type like 100 words a minute. Now I am down to 10 and use a voice dictation system.” – Dan Andrews

Dan Andrews, left, has always been very kind to me. So when he announced that he was shutting down his blog, Political Leverage, because of his deteriorating health, I felt bad. (And that takes a lot. I really don’t have a conscience.)

I wanted to write a nice, little send-off piece; something witty, something profound about him. Maybe even something kind. Return the favor.

But, words, often, are too small to fill the worth of some circumstances.

So I really don’t know what to say.

When I moved to Knoxville, Dan was one of the first people I met, who hung out the Deathstar, didn’t work there and actually enjoyed it. (The guy loves his local politics.) I didn’t really know a whole lot about him, but he was usually taking pictures, usually talking about current issues. Granted, I didn’t always agree with what he said – or with his angle for that matter – but he did do his research.

Hell, when the mayor said he was going to cut jobs, Dan called it almost on the nose. I’m still scratching my head over the bizarre formula he used, but, wow, he got the numbers right. Dean Rice, the county’s chief of staff, later told me he that he, too, was surprised. (The administration certainly wanted to keep it under wraps until the budget was released.) So, way to go, buddy.

Like I said, Dan was one of the first folks I met. He’s also the first person – and to this day – only person I’ve met that has Parkinson’s. Sure, I’ve seen Muhammad Ali and Michael J. Fox, in televised interviews, struggle with its effects. And I’ve read about it. But, it’s not until you see the disease upfront, in person, that you realize just how debilitating it can really be.

Dan is in his 30s. That’s not really fair. If it was me, I’d be bitter. And maybe he is. But, he’s never let on. No, he kept pecking away at his keyboard, typing out his blog.

And taking pictures. Some pretty good ones, too.

But, back to his blog. I never really read the local stuff until work mandated that I do my own. So, during the past few months – every morning – I read through a handful of them. And Dan’s was one. (Shock and Awe, Humphrey on the Hill and Knoxviews are some of the others.)

I have to say, it was always interesting. He had surveys, video interviews and some inside baseball that you don’t often find anywhere else. (I suppose that’s what blog are about.) But, he also had a passion to cover minor meetings in the nooks and crannies that other reporters (my paper included) don’t reach. So that was cool, too.

I wish he left all that stuff up. But he didn’t. The only post left is his departing message. I encourage you all to read it. In fact, I also encourage you to read Brian Hornback’s post about Dan if you haven't already.

Here is some of what Dan says:

“My original goal was to have this awesome successful blog that would cover my rising medical bills. Ooops, that didn't happen. With time gas and energy the reverse was happening. This blog was actually costing me money. The thing with Parkinson's is the medical bills don't go down. My pipe dream was I could cover politics and save my life. Ha, ya unrealistic now that I look back on it but hey it was worth the shot.”

He then goes on to write about how the disease is affecting him. Again, please read it.

In the meantime, Dan is going to still to hang at the Deathstar and he’ll still pop up at a political rally or two. And from what I understand, he’ll still work as a freelance photographer. I also told him that if he shoots video, I’ll post some stuff here.

As a final note, if you’re feeling a little charitable, why not throw a few dollars over to the Michael J. Fox Foundation for Parkinson’s Research.