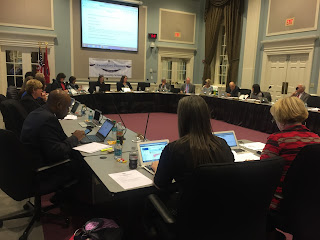 The Knox County Board of Education on Wednesday agreed to pick an interim superintendent to oversee the school system by the first week of April and then have that person in place on July 11 – the Monday after current Superintendent Jim McIntyre officially steps down.

The board unanimously agreed to let member Terry Hill oversee the vetting process. Board members and the public who wish to submit names should send them to Terri Coatney, the board’s executive assistant.

Hill will interview the candidates and then submit a recommendation for the board to discuss during an April 4 workshop. Members would then vote on the appointment April 6.

After that, the BOE’s chairman, Doug Harris, would have until April 17 to negotiate a contract with the selection.

McIntyre, who was hired in spring 2008, agreed in early January to step down on July 8 in exchange for a one-year severance. The move came a little more than a month after he agreed to a two-year contract extension that pays him $227,000 annually.

As superintendent, McIntyre oversees a $438 million budget, 90 schools and a 7,500-person workforce that includes almost 5,000 teachers.

Board members during Wednesday’s discussion said they were looking for someone familiar with the school system’s budget, schools and staff.

Vice Chairwoman Tracie Sanger also suggested that the interim superintendent “already have a good relationship” with Knox County Mayor Tim Burchett, and the board members.

Burchett, who first took office in 2010, and McIntyre often butted heads over finances.

Board members said at some point later in the year they will talk more about putting together the process to pick a permanent replacement. The interim candidate cannot hold that position, members said.

After the brief meeting to talk about the interim selection process, a number of officials said they heard that some board members are interested in nominating Buzz Thomas, the president of the Great Schools Partnership, a local tax-exempt organization that serves as an advocate for the KCS and help raise money to support a number of programs for the system.
Posted by Mike Donila at 8:58 AM