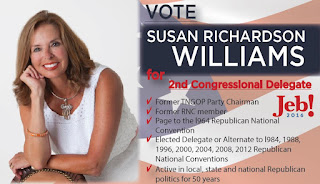 From Susan Williams: As you know, the Tennessee primary for selecting the Republican nominee for President of the US is on March 1 and early voting begins this week, Feb. 10.

I am one of those! Since I am running as a delegate committed to Jeb Bush, I think my name is fourth under the Second Congressional District list.

The really interesting thing is that you don't have to vote for Jeb Bush (even though I would like you too) to vote for me as a delegate.

You can vote for Kasich or Trump or Rubio or anyone who's still standing on March 1 and still vote for me for delegate.

I would greatly appreciate it! I've been to 7 Conventions and feel very qualified to represent Tennessee well. Thanks for your help!

(As always, shoot the ol' Porch your political stuff for publication consideration.)
Posted by Mike Donila at 2:24 PM