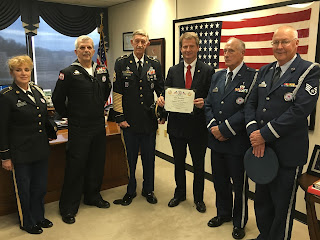 A small group of members presented him with a plaque and patch in his office.

According to their website, “The Volunteer State Veterans Honor Guard was assembled to offer our last tribute of respect and affection to our departed comrades by providing military funeral honors to all East Tennessee county veterans who are honorably discharged, without regard to rank, sex, color, creed, or national origin.”

The honorary membership the mayor received is for members of the community who don’t qualify to join the group, but are outstanding supporters and advocates for veterans, officials said.