County Clerk recovering, back at work 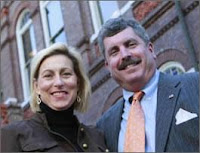 Was looking through the blogs this morning and came across the rogue's report on Foster Arnett's trip to the hospital, so I figured I better give the good county clerk (pictured to the left with his wife) a call.

According to Arnett, he returned to work this week, even spending eight hours in the office on Tuesday, which he joked wasn't a full-time day for him.

Overall, Arnett said, he was at the UT Medical Center for 10 days (starting March 21), including three days in the critical care unit. He was treated for five bleeding ulcers.

He's still under doctor's care, but is feeling better.

Arnett said the ulcers were stress related and he was told to “stop worrying about the little things.”

Arnett has since returned to work.

In the meantime, Arnett said his wife of almost three decades has been cancer free for a year.

Dottie Arnett in January 2011 was diagnosed with breast cancer.