When there is smoke, the mayors weigh in 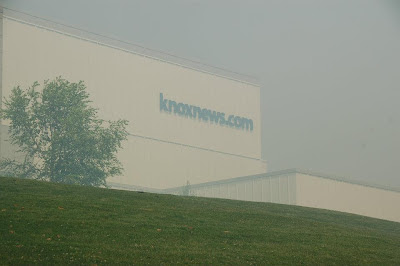 Photo by Dan "da Man" Andrews
Apparently, there's a fire going on or was going on or whatever. I don't know. I don't pay attention to this stuff. I know that there's a ton of smoke around the Metal Shed and it smells like (insert whatever expletive you feel necessary here), so I'm over at the Deathstar waiting on a pension board meeting that TV will no doubt bother to attend. Heh.

Anyhoo, here's a story about the smoke or whatever right smack here.

You can find that bad boy right smack here.

Note that somehow Michael "Big Sexy" Grider managed to get the county mayor's name in first on the spin job. Heh.
Posted by Mike Donila at 9:10 AM