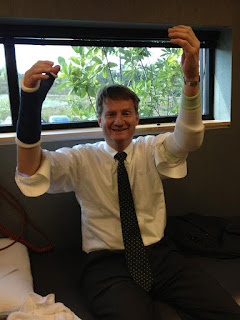 
Yes, in the latest string of “he did what?” events, Knox County Mayor Tim Burchett was involved in a motorcycle accident Thursday evening that left him with a broken “proclamation signing hand” and busted elbow.

Now, I know I’m making light of this somewhat, but it’s because I talked to the mayor and he seems to be recuperating and joking about the incident.

Here’s what the mayor, a longtime motorcycle enthusiast, said happened: Burchett was riding his 1972 BSA-A65 Lightning around 10 p.m. on Amherst Road when the back tire blew.

He said he was going about 20 to 30 m.p.h. and he tried to ease it off the route he called the “Poor Man’s Dragon” so he could put lay it down.

“It’s not like in the movies when they run off the road and weave around the trees or a fence,” he said. “You really can’t dodge them.”

He said he managed to get off the road and put the bike down but it landed on his left side. When he did that, his left elbow hit the ground “and it just exploded.” He then hit a tree with his right arm and knee.

“The thing that bothered me more than anything was that I couldn’t tell where my legs were (or how close they were to the chain),” he said, adding that the engine was running at top speed but his broken right wrist prevented him from turning off the accelerator off.

The mayor said he managed to turn off the bike (the key is in the back of the bike), which killed the engine. (New bikes by the way shut off immediately when they go down.)

“My thoughts were: I have a hot engine and gasoline and I’m laid up in all this brush,” he added.

So get this: Someone stops to help him. The mayor patches up the tire with fix-a-flat or whatever and then drives off as blood from the injury fills his jacket and runs down his arm. (That’s rock star stuff right there.)

He gets about half a mile and notices that the tire is again going flat.

“I think God was telling me to get off that dad gum thing,” he said. “I got it trucked home.”

It gets better: The mayor doesn’t go to the doctor. No, he goes home, gets up in the morning and then goes to work, missing only one meeting until Friday afternoon he finally decides that maybe he should get a little medical helped “because I was pretty banged up.”

“Well, I had been sick with the flu the past week and I was so far behind on my work, that I needed to catch up on it,” he said, justifying why he didn’t need no stinkin’ doctor.

The mayor will sport a cast for a few weeks and he’s also got a pad on his elbow. He said he’ll continue to ride, but the doctors told him to ease off until he’s fully recovered.

“My dad used to ride (when he was alive) and when I go out there I feel close to him even now,” the mayor said. “But while I was in that ditch, all I heard was my mama saying: ‘You need to quit riding those things.’ Of course my daddy was laughing.”

Credit to Dan the Man for breaking the story Friday evening and the mayor for supplying the photo.
Posted by Mike Donila at 4:11 PM