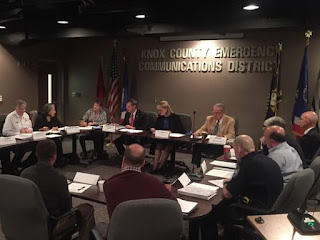 The Knox County E-911 Board on Monday declined to sign off on an almost $9 million contract to replace the county's antiquated emergency radio system. Again.

The 11-member board voted 5-5. Panel member Brad Anders, who is also a Knox County commissioner, declined to vote, saying he didn't feel the initial bidding process was "clean."

Now, the board is expected to start the whole process over when it meets again in January.

At issue was months of debate that started when a selection committee picked Harris Communications and then the board refused to award the company an almost $9 million contract.

Instead, a number of members suggested the county should stick with Motorola Solutions, which has served the E-911 Center for more than 25 years.

Then members started talking about joining a state-operated system.

The board in mid-September agreed to pay Blue Wing almost $40,000 to determine the best direction to take the system.

The review concluded that the state option is at least $934,467 more costly during the course of the systems’ 11-year life cycles.

Further, the report noted, the county would not charge a radio system user fee of $28 per radio, per month, under the state system.

The lost revenue during the lifecycle adds up to almost $2 million.

Officials with Motorola Solutions - the equipment the state system uses - disputed much of the findings and said Harris actually would cost more money. In a handout provided to board members, Motorola questioned why the county wouldn't charge a user fee, and suggested that the Blue Wing report was tainted because it used "incorrect data and left out additional costs."

In the end, the vote to hire Harris failed.

Jones, an advocate of joining the state system, said it is "the wave of the future," and that "if we do this standalone it seems to me we're an island in the middle of the ocean."

He also said he didn't want "a blue light special."

"These men and women are putting their lives on the line every day," he added.

Shortly after the vote, the board quickly adjourned without talking about the next step. Members, though, said they expect some discussion during the next meeting, which is in January. At that point, the board will probably restart the bidding process, Burchett said.

"We'll follow the process and that end result is what we'll have," he said.

Anders, who declined to vote, said he was concerned that prior to the bidding process,  E-911 Center Executive Director Bob Coker met with Harris officials to talk about sole sourcing the project. He questioned the transparency of such a move. He wants what he called a "clean" process the next time.
Posted by Mike Donila at 1:05 PM