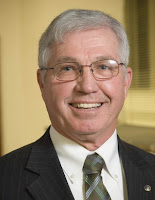 There was word going around that Knoxville mayoral candidate Ivan Harmon, left, was thinking about asking for a recount of Tuesday night's election.

He came in third, losing by 53 votes.

Apparently, he won't do that.

I talked to him Wednesday about whether he would endorse anyone, and at this point, he's not committed to either of the two remaining candidates. He said that he'd like to meet with both of them at a future date and decide then.

In the meantime, he told me that hunting season starts soon, so that's what he'll be doing. That and spending more time with his family.

Personally, I want to wish Ivan the best of luck in the future. He's a nice guy.

Here's the note he sent out this morning:

I want to thank my wife Jane, for all of her love and support, not only during this campaign, but my entire married life, and to my children and their families as well. Furthermore I would like to thank my entire staff. These dedicated people worked hard, and many hours and were all volunteers.

After giving this considerable thought and prayer, I have decided that it is in the best interest of not only me, but most importantly the citizens of Knoxville, to concede the race for Mayor. The American way of voting for our elected officials, although not perfect at all times, is the best way in the free world to elect our leaders. The voters have spoken, and I will neither delay nor prolong the process.

I want to also offer my congratulations to both Madeline Rogero and Mark Padgett for their well-earned victories. I wish them the best as they run to fill the City of Knoxville mayor’s office. I love this city and serving its citizens and that is why I decided to run for mayor, to continue moving the city forward. I will be taking a few days to think and pray about what my next step is and which candidate most mirrors my values. That will be the candidate that I will endorse and ask my supporters to do the same.

He is a good man! Best wishes to him as he finds what he should pursue next (after hunting).
-Jennifer