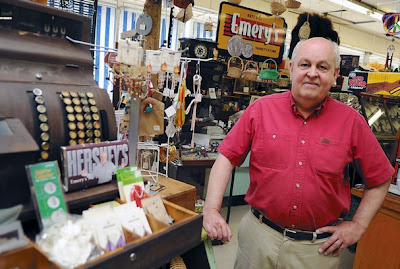 Ron Emery, owner of Emery’s 5 & 10 at Chapman Highway and Moody, should benefit from county's first 'cash mob'
To the surprise of no one, the first location to receive a visit from the “Knox Cash Mob” is Emery's 5 & 10 on Chapman Highway.

This is according to the latest Big “Michael Grider” Sexy spin release which touts the announcement as “after more than a week of anticipation . . . .”

Burchett is urging residents to show their support by spending a few dollars at a yet-to-be named business via a cash mob, a concept that encourages people to show up at the same time at a small business and attack it with commerce.

The idea, according to county Mayor Tim Burchett, is to hold these so-called cash mobs at various small businesses all over the county, with the first few in South Knoxville, which the rest of the city generally treats like an ugly stepchild. Burchett was inspired to organize a cash mob to help boost sales after seeing a news report of a successful one held at a hardware store in Ohio.

Business has been slow for some south side operations ever since construction started on the Henley Street Bridge.

According to Grider's big spin:

“Emery’s is a local institution, and this business represents so much of what is good about our local entrepreneurs,” Burchett said. “I hope everyone will come to South Knoxville tomorrow and spend $5 or $10 at Emery’s, or any other South Knoxville business.”

Cash mob participants are asked to visit the store sometime between 5 and 7 p.m.

Emery’s 5 & 10 opened in 1927 and is a third-generation business. According to the store’s website, it is the oldest family-owned 5 & 10 store in the United States. Owner Ron Emery is a former U.S. Marine. He was wounded in Vietnam and received the Purple Heart. His father also served in U.S. Military and was a bomber pilot during World War II.

Where can I find more information on the "cash mob" program?

Does this mean every struggling small business in the county's going to get a "cash mob" visit? How are businesses selected for this program? Is there an application/selection process, or are these businesses chosen arbitrarily? Does the program cost taxpayers anything? Who oversees the program? Is there a program to oversee or is this just a "thing" Burchett's trying out? If it's just a "thing", is the county government allowed to dole out preferential advertising and attention like this?

Nifty idea but I have a hard time seeing how it can be a fair program and still viable.

Oh, and is Rogero doing this too? From what I understand the logistical headache that is South Knoxville is her problem now.

It's "just a thing" that I'm sure will be forgotten after the second or third event.

There doesn't appear to be a selection process - just a whim of the mayor.

I don't think it costs anything.

I have not heard about Rogero's camp doing anything like this.