Jarret and that pesky mediation thing

Now, on to Part II in MediationGate. Heh.

OK, good readers, the other day we discovered that I learned how to take screen shots on the computer. I know, I know, hold the applause. Anyhoo, some folks say that the county’s law director has a mediation business on the side. There’s even a web page for it (click right smack here for that bad boy).

Now, Jarret says he hasn’t conducted a mediation session since becoming employed with the county. Again, I encourage you to read one of the links above 'cause I’m not recapping.

However, one of my readers – whom I care way more about than the knuckleheads who comment over at the KNS site – sent me a screen shot from Jarret’s mediation page from a week or so back. 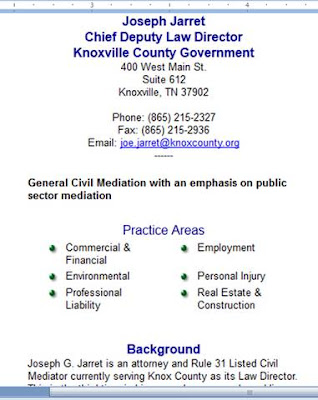 And here’s the one I took the other day: 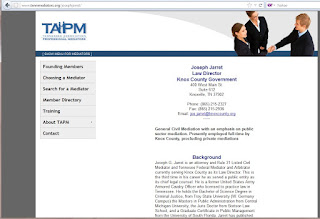 Now, you should note a couple of things. In the first one, Jarret says he’s the county’s chief deputy law director – not the law director. Also, in the second (and more recent) one he adds the statement: “Presently employed full-time by Knox County, precluding private mediations.”

This means, according to Jarret, that he does not run a private business. But, some folks are now curious why he now felt the need to add the additional language. I was told that he was lying to us and that we weren’t doing much to call him on it. So, I picked up the phone and called him on it.

Jarret verified that the screen shot was legit and that it was up for about two years before he recently changed it. He said:

It gets updated every year when you renew your dues, and I updated it. But I have never done a private mediation ever in the state of Tennessee. I’ve only volunteered to do public mediations and I conducted those on behalf of the Community Mediation Center on behalf of the sessions court judges. When I first came here, I did two things. I joined the East Tennessee Legal Aid and did pro bono work and I did pro bono mediation for the courts.

OK, so I asked Joe when exactly did he update it? He said about a month ago when a local mediator called and asked him to do a private mediation for free. He told him that he couldn’t. Joe gave me the guy’s name and number to verify it.

All I can do is ask. If you don’t like his answer – and I know some won’t – there’s not a whole lot I can do. But, I did take the time to ask. (And I do all this blog crap for free and mostly on my own time.)

UPDATE: A reader already pointed out that under the first screen shot, the heading is "Deputy Law Director," but the text at the bottom says "Law Director." The reader suggest Joe has been keeping this up to date the whole time.

Disclaimer: Jarret is challenged by former county Commissioner Richard “Bud” Armstrong for the law director’s seat. Both are Republicans. The Democrats were too chicken to field a candidate, so whoever wins in the March 6 primary takes the prize. As always, Screams from da Porch endorses neither of the candidates and encourages all readers to write in its author’s name as your preferred candidate.

Jarret is lying and continues to cover up his background.

He's full of shit - someone should call him on it.

Wow, "Billy" - you've been trying your ass off to make hay on this, haven't you?

Hate it for ya, budro, but you'll find the 20th-century-style politics don't play well in the 21st.

...and if you didn't show Donila the "full screen shot" - what DID you show him? How can it be verified that these screenshots have been unaltered?

And even if they are unaltered - where's the proof that this guy's running a side business?

he's got the full screen shot . . . shows clearly that the old web site was up on the 14th.

Believe what you want, Brian.

"Billy", it's not difficult to doctor a screenshot. Hell, I can make it look like I took an "original" screen grab of this site with an article "written" by Donila that depicts him in drag shaking hands with a Nazi walrus while a Garfield in a fishbowl looks on approvingly.

Like I said - this voter is not interested in the cloak-and-stagger aspect of the way politics USED to be done around here. If this is the best you've got, I'm going to go with Jarrett. Bud's better suited for Commission, where he was before.

Best of luck getting up to speed on the new political system - the sooner, the better.

"OK, so I asked Joe when exactly did he update it? He said about a month ago when a local mediator called and asked him to do a private mediation for free. He told him that he couldn’t. Joe gave me the guy’s name and number to verify it."

...hey, Mike, what's the name of the local mediator in question? I have a theory to test.

"Jarret verified that the screen shot was legit . . ."

Brian - you are the only one questioning the content of the screen shot - even Jarret admits it is "legit."

If the truth is "old fashioned," then my grand kids must be right about me.

We're not getting anywhere the usual way, so let's try a different approach:

What, exactly, is your accusation against the guy? You've stated "lying", but about what? What, specifically, is your contention?