HR's Fogerson reflects on past decade 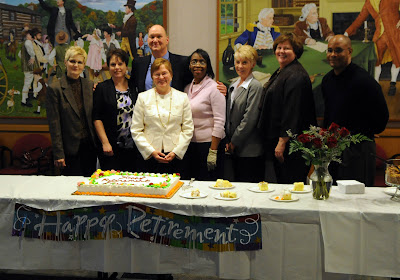 Here's an interview I conducted with Knox County Human Resources Director Frances Fogerson, who retires on Friday. She's worked for the county 12 years, spending almost a decade as a department head.

In the following interview, Fogerson looks back on her time with the county, touching on her best hire, worst hire and the nickname she doesn’t recall getting.

What was the most difficult firing you had to be a part of?
Firings that involve a threat of violence always got my attention. You just have to be really cautious in those cases. Several times I was definitely glad we had law enforcement close at hand.

The really difficult task is to tell someone about a layoff. In that case, the employee is usually a skilled person doing the job we hired them to do. I go into that meeting with three goals – brevity, respect and information. I speak softly and really try to emphasize that it was the circumstance and not their performance. Then, I make sure they know about their options in terms of insurance, retirement, unemployment claims, etc. And, of course, I always offer to serve as a reference when they’re looking for a new job.

What was the most unusual firing?
I once fired an intern who just couldn’t seem to be successful at several placements we tried. When I asked him what he had expected when he took a job with the county, he said he thought it would be champagne receptions and brunch with the mayor. Clearly, we were a disappointment for him.

How has the office changed over the years?
Every mayor has been different and had different styles. You just have to understand that when the administration changes, everything else will, too.

Thoughts on a civil service system.
There was an effort in 2008 to consider civil service for the county, but it didn’t succeed. Civil service is an employment system that predates professional human resources.

I like the merit-based hiring aspect of it, but I don’t like the slowness of filling vacancies or the almost ‘ownership’ status that employees have with their jobs. I definitely prefer a professional HR system. I’m not even sure if there’s a county in Tennessee that uses a civil service, especially one that doesn’t include law enforcement or fire services.

What’s the best part of the job?
Hand down, it’s doing letters and forms to help an employee with an adoption. It only happens about once a year, but I get real pleasure from playing a small role in the process. And, I always want to see the baby!

Worst part of the job.
My ‘Summer of Hell.’ That’s what I call the time in 2007 when we were trying to get a contract with a medical insurance provider. We read through boxes of notebooks to evaluate the companies that bid and then the County Commission wouldn’t approve the contract with the winner. We expanded the evaluation group and did the process three times, each with the same winner, before the commission finally accepted the results. My office was absolutely filled with notebooks and I read each one, taking them home on nights, weekends and holidays. It was the most frustrating task I’ve ever had to do.

Didn’t you get a few nicknames over the years (like ‘The Terminator’)?
You’re the only person who has ever suggested a nickname. I know the one you mean, but I never heard it personally. Really, I’m just an ordinary person who learned all I could about my job and then tried to do that job with fairness and consistency.

Was there a hire you regret making?
Yes. One official asked me to find a job for the relative of an acquaintance. I interviewed the person to determine her experience and skills, and then tried to find a position for which she was both qualified and could be successful. I wasn’t having much luck when a director jumped in and hired the woman. It was a poor fit and caused a lot of turmoil within that department. It simply didn’t last long.

What was your best hire?
I interviewed (current senior director of finance) John Troyer, although I didn’t make the hiring decision. I think that turned out pretty well.

What do potential employees see as attractive reasons to work for Knox County and what do they see as turnoffs?
I think our benefits are superb. We have a decent amount of vacation and holidays, and the insurance is excellent. Our retirement plan — not a pension plan — is very responsible and requires everyone to contribute 6 percent with a matching 6 percent added. It teaches you to save for retirement and that’s a very good thing.