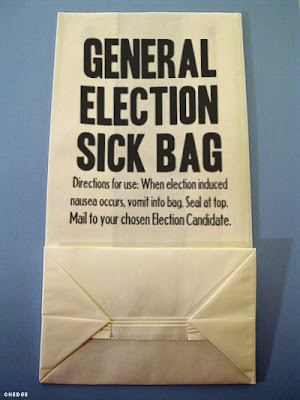 Ah election time. Hate this stuff. When all the phonies come out. Things get dirtier than usual. The chickens come out, too. And that's when you'll REALLY find them. Yapping and lying on local message boards, blogs and our own lovely KNS commenter sections. (Check out all the newbies who start up accounts. Or should I say . . . . Nah. Whatever.)

Anyhoo, I suppose I should address a few things about a couple of the Knox County races before some knucklehead accuses me of favoring one candidate over the other. It will happen. Trust me. During elections, people turn into these weird creatures called voters. And voters are stupid creatures.

In between, I've been running around, checking out all sorts of rumors. None so far have really amounted to much. I'm sure there will be more soon.

With that said, I can't write about everything. I wish I could, but we've only go so much space in the newspaper and apparently people also like to read about UT. Cause, you know, they're football program is doing so well. Heh. Whatever.

But, without fail, someone is going to say: What about this? Or what about that? Or, you got duped again KNS because you didn't bother to check this out. Or, you're scared of the candidate. Or, just something stupid like all of the above.

(I get it, people. We're not going to make you happy unless we completely praise your candidate and bash his/her opponent.)

Soooooo, I'll throw up (or puke) some of the things here that didn't make the paper. Or, I'll link to some other blog posts around the community that I find interesting or make me laugh. Or maybe I won't. Depends on the mood and time, I suppose.

And as far as that stuff goes about hating elections? I lied.

As always, if you vote early or vote on election day, write-in my name.

I say here here to you Mike on this one. 90% of those commenters are just blowing steam, and then of course there's mine. Ha!
Most of the campaign rhetoric are lies and blown out of proportion statements putting down one candidate or another.
I'm with you, and tired of the whole thing! March 6th can't get here soon enough.

Nice for the current insurance claims adjuster to pipe in

God, Donila, do you really HAVE to blow chunks for the anonytards to eat?! You know if you keep giving vermin a food source, all they're going to do is increase their numbers.

Better idea - why not use this space to drill down into actual FACTS about these two races? Instead of the same whiny Springeresque good-ol-boy electoral garbage to which we are all "treated" every other year or so, step up to the plate with the REAL information.

For example: Candidate bios? Awesome stuff. And you have way more space and time on your website than you're ever gonna get at the Shed's for that, so go for it. (I'm kinda bored and wouldn't mind helping out with something like that, if you can stomach boring ol' facts.)

Change the tone on this election, Donila. You're not from around here, and yet again that's to your benefit. Give us some REAL coverage. REAL facts. REAL information.

(And skip the local links, because they're pretty much all opinionated garbage largely devoid of fact, intelligent analysis and/or interesting advertisements.)

Thanks. Now get out there and don't fuck it up.

...oh, and why'd you get stuck with the two races that end the soonest?