Click right smack here to read me whining about local elections. Now. On to the show:

In the past few weeks I've received a number of emails from folks asking about county Law Director Joe Jarret’s mediation “business.” (Note that the word business is in quotes.) In fact, someone even complained to the audit committee’s tattletale line last year about it, claiming that Jarret was operating a business out of the law department.

Anyhoo, I figure this is something folks want to know about. Sooooo, click right smack here for the link that’s going around. Or look at the fancy screen shot picture I took. Yeah, I’m learning. Somewhat. 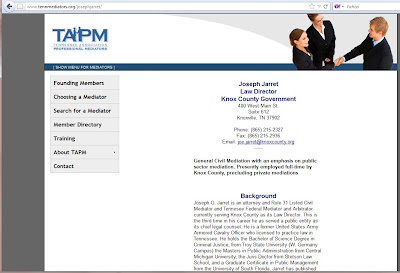 Now, I figure if you’re running a business, then you’re making some coin. Right? Not so fast. Right there on the page and in bold it says Jarret precludes private mediations. That means he’s not collecting the coin that some people figure he is. Now, that was just me figuring this on my own.

So, I asked Jarret.

Mike, I have not conducted a mediation session since becoming employed by Knox County. Prior to working for Knox County, I did pro bono mediations for our sessions court judges. I have never conducted mediation for profit in Tennessee. Last year, someone also accused me of running a mediation business out of my office along with employing the Mayor's wife as a "ghost employee." I have no idea where this is coming from. I can only assume that by representing myself as a certified mediator, people presume I have a side line. I don't.

Hmmmm. Sounds to me like he’s not running a private business. But, what do I know?

Did staff drop 30 percent under Jarret?
Ok, there’s another one going around. Figure I’ll clarify this one, too, since I was asked by another reader. Also, Jarret’s opponent, Richard “Bud” Armstrong, mentioned it to me.

During an interview I asked Bud why – when he was on the County Commission – he voted for Jarret to take over the law department.

(As you might recall Bill Lockett had resigned in disgrace after hornswaggling about $60k in folding paper from the law firm he worked for before local voters – in another moment of brilliance – decided to put him in office.)

Armstrong said he did so because "at that time the County Commission was dealing with real turmoil and Joe was the obvious pick for consistency, continuity and stability."

"We do that and look at where it ends up. We lost two chief deputies, two staff attorneys and an investigator," said Armstrong. "There's been a 30 percent turnover in the office. I'm real disappointed."

He said the office lost two chief deputies – one relocated to Texas for personal reasons a few weeks after he was hired and the other left "when it became obvious we had divergent views on how to run the office." Jarret said he hired both of them.

"I likewise encourage her to pursue her career goal," Jarret said. "Only an inexperienced manager would not realize that turnover is inevitable and that you never hold good people back."

Regardless, Armstrong said, the law director should focus more on running the actual department and he doesn't believe Jarret does that. He also said he would strengthen the office staff through training and would not let anyone go.

"The law director's job is to direct the staff because the law director is going to be there no more than eight years (because of term limits) and some of the staff will be there for 25 years or more," Armstrong said.
Posted by Mike Donila at 7:27 AM

On Armstrong's side, we've got a near-career politician that's been thoroughly steeped in local good-ol-boy-style politics, doing precious little but attacking his opponent any way he can, with what appears to be little regard to the facts of the matter. (Whatever the matter may be at the time.)

On the other side, we've got a guy that's kept his nose to the grindstone, hasn't appeared to do anything publicly with the attacks thrown his way but rebut them, and, of course, doesn't appear to have stolen anything from his constituency or sold his soul to the tiny little group of tiny little local people that still pretend they control politics in this town.

(And no, I'm not taking a shot at Bud's most ardent supporter there. Hunley's anything but little and never controlled anything in this town besides the hit-job rag he calls a weekly. That still has a crappy website.)

Bud, if you expect to pull off the upset here you need to abandon the Gingrichian approach and stand on your record. You're not dumb. You can run a race with integrity and maturity if you choose.

(Way to not fuck it up, Donila. Just remember to be an equal-opportunity party pooper - no favorites.)

Mike - I've got a screen shot of Jarret's Mediator web site before he changed it to reflect "no private mediations".

What e-mail address would you like me to send it to?

Wouldn't be reliable anyway without examining the original file to see if any modifications were made, or when the original was saved. (Also helps to be able to check and see if THAT data was monkeyed with.)

Not hatin'. Just sayin' a screenshot's not everything.