So, why isn't Carter 'owner' listed 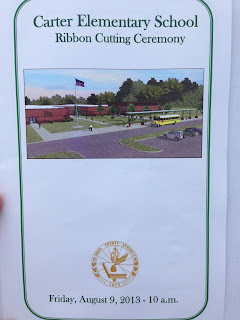 In what looks like another edition of Amateur Hour, the school system this morning handed out programs for the Carter Elementary School unveiling.

The problem? Well, yesterday's programs for the Northshore unveiling noted that the school system owned this school. (Click right smack here for that bad boy entry.)

It then went on to list some other irrelevant information on the cover.

Well, today's program included . . .  Nothing. Other than a big white space.

How come no one listed "county" as the owner? Where is the comparable information?

Oh, right, the spitting contest between whose name should be placed on the school deeds - the school system's name or the county's name.

God forbid, the school system let the folks who attended know exactly how this building was funded and who spearheaded the initiative. Or even how much it cost. (Does the school system's $1 million-a-year PR department not want taxpayers to know?)

Bush League. Seriously.
Posted by Mike Donila at 8:45 AM