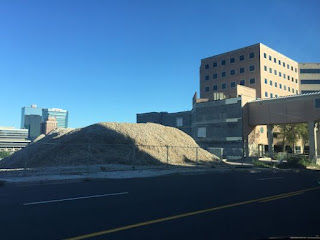 Local leaders on Monday are expected to give the Knox County Commission a resolution that asks the board to set aside $1.5 million to help the Regal Entertainment Group relocate its corporate headquarters from the Halls Community to the South Knoxville waterfront.

The monthly non-voting work session is set for 5 p.m. Monday in the Main Assembly Room at the City County Building.

The proposal is not currently on the board's agenda, which was released publicly Thursday afternoon. It will be added before the meeting starts.

"There will be something before commission to pass without recommendation," said commission Chairman Dave Wright. "I do not expect any discussion."

Wright added: "The real conversation, though, is that we're talking about jobs and we don't want them to leave Knox County."

The commission will then vote on the proposal during its Oct. 26 meeting.

At issue is a proposed plan that entails the city buying back the building that’s still standing just west of the Gay Street Bridge at the development site of the old Baptist Hospital, and then leasing it back to Regal.

The plan calls for the county to pay $1.5 million, the state to chip in another $1.5 million and the city to put in upwards of $10 million to help keep the headquarters of the nation’s largest theater chain in East Tennessee, multiple sources confirmed to WBIR 10News on Friday. The plan also will include additional tax incentives.

The city supported the project by securing an Environmental Protection Agency brownfield remediation grant, and through a $22 million tax increment financing, or TIF, package.

In addition, multiple sources told WBIR that Gov. Bill Haslam and Randy Boyd, the state's commissioner of economic and community development, will be in Knoxville late next week to hold a press conference that details the overall proposal to relocate the Regal headquarters.

Sources also have told WBIR that the City Council will then talk more about the proposal during its meeting at the end of the month.