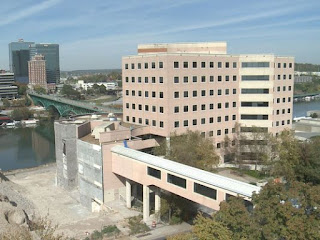 Well, at least ONE elected official has publicly asked questions about the proposed Regal move that up until a heavily controlled press conference that included ousting protesters has been about as transparent as mud.

His comments came toward the start of the meeting, when council members may present reports. Discussion of the city's proposed deal with Regal was not on the agenda.
Della Volpe, who represents the 4th District, spoke up about 10 minutes into the meeting, saying he has been receiving comments from the public.

"You know, there's two sides to the coin," he said. "One is, of course, it's great to have a good business like Regal in our downtown and the workers here using the facilities and the restaurants and the businesses that are here and helping to support that and the waterfront."

"The other," he continued, "is sort of the economic wisdom of putting out $9 million to make that happen on the city's part. We are obviously the biggest player in that."

Gov. Bill Haslam and state leaders announced on Friday afternoon plans for the relocation of the site of Regal Entertainment Group's headquarters to the South Knoxville waterfront. The company's headquarters are currently located 10 miles away from that, in the Halls community.

Haslam said Regal has the intentions of adding approximately 70 new jobs with its relocation.
Local and state government are set to give a combined $12 million as part of the move. That includes $1.5 million from the state, $1.5 million from Knox County, and $9 million from the city of Knoxville. Regal will pay an estimated $4-5 million in renovations.

Rest of story RIGHT HERE.
Posted by Mike Donila at 11:03 AM