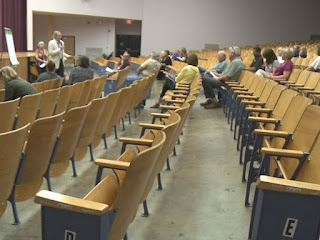 Thursday night marked the first of two public forums for community members to share their opinions on Knox County Schools' search for a new superintendent.

The meetings come after former superintendent Jim McIntyre announced his resignation in January and stepped down in June.

Buzz Thomas, of Great Schools Partnership, then took over as interim superintendent.

Some three dozen people gathered Thursday in Central High School's auditorium, where Thomas, a number of Knox County Board of Education members and other district leaders heard from community stakeholders, who included parents and educators.

David McCroskey attended the meeting. He's the grandparent and guardian of three Knox County Schools students. He said while he didn't dislike the former superintendent, he felt McIntyre was overly focused on the financial side of the job.

“I personally feel that we need someone who is an educator and is willing to sit down and talk to people and understand the needs of our children, as opposed to worrying about the financial side of it," he said.

Kathleen Robinson, a former KCS teacher and parent, hopes teachers and parents have a large say in who becomes the next superintendent.

She hopes the next superintendent will focus on empowering both students and teachers.

“I would like a superintendent who has my child’s best interest at heart," she said.
“We have a lot of disenfranchised teachers, I feel, due to the fact that they don’t feel trusted.”

Board member Terry Hill attended the forum as well. She was disappointed with the turnout but impressed with those who did attend.

“I thought it was a wonderful forum we had tonight. I wish we would’ve had a few more people. But the folks that were there had really concrete suggestions, were very thought out, very purposeful," she said.

Prior to the meeting, WBIR 10News spoke with a number of district leaders on the importance of these public input sessions.

"It's an important job we have to do, so I think the more feedback we have, the better," new BOE member Susan Horn told 10News.

She said she heard from a lot of parents and educators while campaigning for her seat.

"People are looking for a great leader, who has a huge, great vision for our schools, who can communicate with people and who has classroom experience and administrative experience," Horn said.

Board members voted earlier this month to defer appointing a chairperson until next month. That's an important decision, as the chair will appoint members to the superintendent search committee.

Rest of story HERE.
Posted by Mike Donila at 9:18 AM