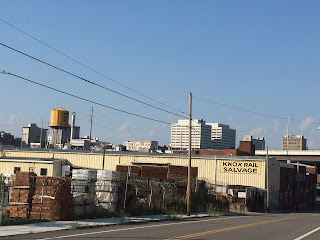 Local businessman and philanthropist Randy Boyd continues to scoop up major pieces of land in the Old City, this time paying a combined $6 million for one of the Knox Rail Salvage properties and a nearby parcel.

The downtown property, just east of Hall of Fame Boulevard and the James White Parkway, represents more than seven acres.

The property was acquired by RR Land, a limited liability company led by Boyd.

Boyd, who also is the state’s commissioner of economic and community development, purchased the land Sept. 1 from Knox Rail Salvage and its president Mike Frazier.

Boyd in March also paid $375,000 for the Lay Packing Company, which is next to Knox Rail Salvage on Jackson Street.

In all, Boyd’s footprint in that area of the Old City now extends to more than 11 acres.

The packing company, coupled with the salvage property, encompasses a 7-acre rectangle between east Jackson Avenue and Willow Avenue; and Patton Street and Florida Street.
The additional acreage is made up by the 0 Patton St. property bought last week and 650 Willow Ave., which he bought in March for $500,000.

Frazier also operates another Knox Rail Salvage, which sells home furnishing supplies, off Magnolia Avenue and does not plan to close it.

"We'll move the supplies (from Jackson Street) over there and to some other properties we're looking at, but we are not going out of business by any means," said Frazier, who bought the Jackson Street property in 2003 for $450,000.

Frazier said he spoke with Boyd during the sale and Boyd told him what he intends to do with the property.

"It's something that will be an asset to the community," he said, declining to elaborate.
WBIR 10News asked Frazier about the long-running rumors that Boyd, who owns the Tennessee Smokies baseball team in Sevier County, would build a stadium on the property.

"You might be on to something," he said. "But I don't want to say one way or the other."
Boyd bought the Smokies, a Chicago Cubs’ Class AA affiliate, in June 2013.

“Jenny (his wife) and I believe in the future of the Old City and want to continue to make investments in the area when we can," he said.  "At this time, we don’t have definite plans for this property.”