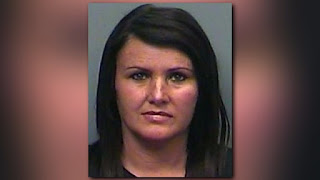 On Monday, she pleaded to one count and paid the full amount of restitution - $18,000.
She faces a Jan. 12 hearing to determining the length and manner of her sentence.

"We are very pleased that Ms. Thomas submitted to the charged offense and that the full amount of restitution has been returned to the taxpayers without the expense of a jury trial," District Attorney General Charme Allen said.

Knox County prosecutors say that because she has a clean record prior to her April 2012 arrest, they expect her attorney to ask for diversion, which – if she say out of trouble – would allow the judge to wipe her record clean.

Prosecutors are expected to oppose such a move.

In the meantime, the state Department of Corrections will conduct a pre-sentencing investigation on
Thomas. When that’s complete, prosecutors in the Knox County District Attorney General’s Office will determine whether to seek prison time for her.

Thomas, 47, was arrested a day after former Knox County Trustee Mike Lowe and several of his employees were. She and Johnny Haun – another employee who turned himself in – worked together but not in conjunction with Lowe.

The Trustee’s Office for years was dogged with controversy and rumors of theft and political patronage. The accusations culminated in late April 2012 when a grand jury that met in secret indicted Lowe and a number of his former co-workers on multiple felony theft charges.

Named were so-called “ghost Employees” Ray Mubarak and Delbert Morgan, who each were accused to getting paid for doing little or no work.

The charges against Lowe, Mubarak and Morgan stem from a state and local investigation that launched roughly six years ago and covered a span from 2004 through 2008.

Lowe and Muburak, an office clerk, each received a year in jail. Morgan, a field auditor, got 30 days and was ordered to pay back $200,000.

Lowe pleaded guilty to two counts of felony theft in March 2015 and was sentenced to 10 years of supervised probation, one year in jail and ordered him to pay restitution of $200,000 to Knox County.
Lowe served about six months since he received credit for good behavior.

In addition Johnny Haun and Rhonda Jan Thomas also faced theft charges, but officials said those two worked in conjunction with each other but independent from Lowe, Mubarak and Morgan.

Haun has a Nov. 30 plea deadline. His trial is set for next February.
Posted by Mike Donila at 8:40 AM