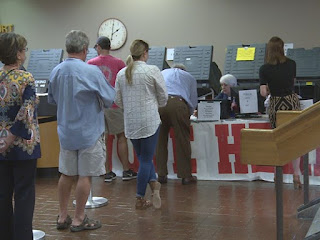 There's a good chance that next Tuesday we might not know who won the 13th District state House race between incumbent and Republican Eddie Smith and Democrat challenger Gloria Johnson.

That's because of the provisional ballots, which could play a deciding factor in one of the most contentious local races this cycle.


"It was a very close race and it was a midterm election, so we didn't have that many people voting,” Johnson told WBIR 10News. “This time, hopefully, we'll have a lot more people voting."

If the race comes that close this time around, Knox County might not know who actually won until weeks after the election.

Provisional ballots are paper ballots that are used when officials have questions about a voter's eligibility. Those votes go to a separate pile to be investigated, and then – if the voter is determined to be eligible – counted after Election Day.

After the 2012 presidential election, the county issued 396 rejection letters for provisional ballots for a number of reasons, including identification problems, failure to register or because the person who voted was a felon.

Chris Davis, assistant administrator of elections for Knox County, said the county no longer has records of how many residents voted through provisional ballots. Under state law, the county only has to keep the records for 22 months.

However, he said anecdotally, “We know from election to election that more than half of the provisional ballots won’t be counted.”

Though more than half of all provisional ballots are usually ineligible, those votes could make all the difference for races as close as this one.