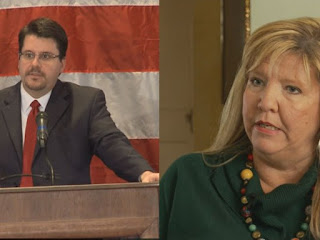 Tennessee State House candidate Gloria Johnson has sued to get information about provisional ballots still being counted from Tuesday’s election in Knox County.

The Knoxville Democrat is seeking through an injunction in Knox County Chancery Court to get the names and addresses of those who filed provisional ballots from elections administrator Cliff Rodgers. Attorney John Eldridge filed the paperwork Wednesday afternoon.

Johnson seeks to notify the 597 people who filed provisional ballots that they have until 4:30 p.m. Thursday to submit proper identification to ensure their ballots are valid.

The ballots are the last  that need to be counted – and Johnson argues they’re key to her 13th District  race.

The only thing left to count are the provisional ballots, which include submitted forms from voters who may have lacked proper ID while voting Tuesday.

Election officials say it could be days before the provisional ballots are finalized.
Posted by Mike Donila at 11:00 AM